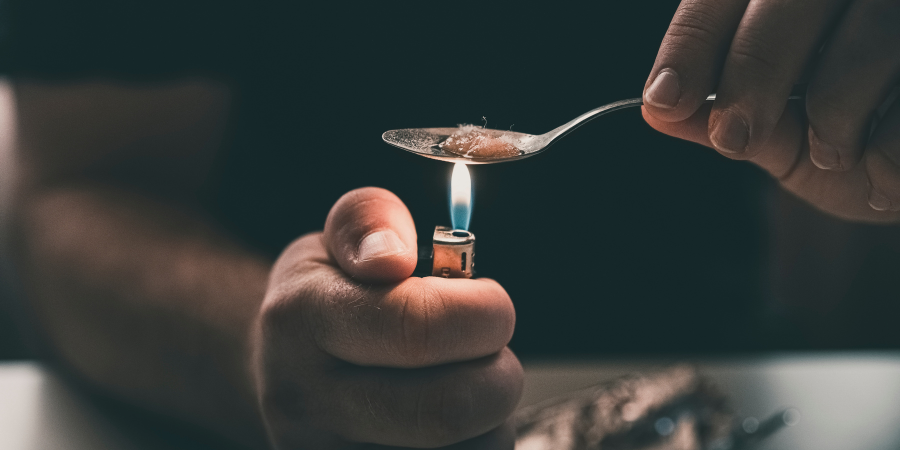 Addiction is an illness of the brain; it can be explained as a pattern of behaviour that is ‘out of control’ and having a negative impact on the daily life of the affected person. The uncontrollable desire to do something, whether it causes harm or not, drives addiction and is associated with substances such as alcohol and drugs as well as behaviours like sex, shopping, and gambling. One of the more commonly abused drugs is heroin, and the impact that this substance can have on the brain and body can quickly lead to addiction. If you have ever wondered what heroin addiction is like, we try to explain it in the paragraphs below.

How Does Heroin Addiction Develop?

Most people assume that the first time one takes heroin, he or she will be hooked, but this is rarely the case. In fact, many heroin addictions begin with a dependency on opiate medications, prescribed by doctors for genuine medical conditions.

The fact that some individuals can use heroin for some time before ever seeing or noticing any side effects is probably one of the main reasons they keep going back for more. That and the fact that the effects of heroin last for hours at a time.

But while not everyone who uses heroin will develop a crippling habit, there are those who will. When the body and brain adapt to the presence of heroin, cravings tend to occur. An increased tolerance to the drug will result in the user feeling the need to increase his or her consumption of the substance. When this happens, an addiction tends to quickly follow, and some users will look for different ways to ingest the drug. Those who have been smoking it might go on to inject it instead to achieve the feelings they desire.

The Effects of a Heroin Addiction

When thinking about what heroin addiction is like, it is important to consider both the immediate effects of the drug and how it can impact on daily life. There are many reasons people initially abuse heroin. Those who try it at a young age, for example, often do so because they are pressured into it by their peers. Some will be trying to impress the people they are with and will take it even when knowing that they shouldn’t.

Painful memories or a need to escape from reality often leads many people down the path to heroin abuse, and many addicts will describe how good the drug made them feel when they first took it. The feelings of warmth and contentment can be just what some individuals are looking for, but it can instil a powerful desire to use heroin repeatedly.

Some people will be so consumed by heroin and their need for it that nothing else will matter to them. The effects of this substance on the first-time user can be so profound that many will describe how they felts as similar to being in love. What most heroin addicts will agree on is that they have never achieved a high as good as their first one. Their never-ending pursuit of this initial high is that which usually leads them down the destructive path of addiction.

Nonetheless, the good feelings never last and a heroin addiction can eventually completely destroy the life of the addicted person. It can have a devastating impact on health and relationships and leave entire families broken and destitute. It is common for many un-addicted people to think that it is only the addict who is affected, but this is simply not true.

There is no denying the impact that heroin addiction can have on the individual. It has the potential to cause many mental and physical health problems while the risk of overdose always hangs over the affected person’s head. Heroin dealers regularly cut their product with other substances in a bid to maximise their profits. This affects how ‘pure’ the heroin is and can have a deadly impact when it comes to potential overdose.

For example, an addict who regularly takes a specific amount of heroin that is, say, forty per cent pure could suffer a fatal overdose by taking the same amount of heroin that is seventy per cent pure. There is also a risk that the addict could have a severe or fatal reaction to one of the substances that has been added to the heroin. Every time a heroin addict gets his or her fix, there is a risk that it could be the last.

Many addicts also do not realise that their tolerance to heroin can fall quickly when they cut back or stop their use of the drug. Even if they stop heroin for a matter of days, their tolerance levels can drop dramatically. Returning to the drug thereafter could easily lead to a fatal overdose if said individual took the same amount that he or she used to take.

Why Can Heroin Addicts Not Just Stop Using?

It is difficult for those who have never used heroin to understand what heroin addiction is like, but for those addicted to the drug, it is all that matters. Nothing else compares and the pull is stronger than anything else, including family members and friends.

It is common for loved ones to wonder why their addicted loved one cannot just stop using the drug. In fact, this is something that most people wonder. To them it is cut and dry – the drug is causing the problem and the way to rectify this is to stop taking the drug. Plain and simple. But is it really?

Logic dictates that if something is bad for you, you stop doing it. But when it comes to addiction, there is no logic. Addicts have no control over how they feel; to them, there is nothing that makes them feel as good as a hit of heroin.

Some addicts admit that when they are under the influence of the drug, they feel great. When the effects wear off, they start to feel down again, and many of these individuals then think why they would want to be free of the drug when it makes them feel so good. Some believe that their life is not worth living unless they have a bag of heroin. Furthermore, the effect that addiction has their brain means that they cannot see the reality of their situation in the same way that everyone else can.

Addicts do not see heroin as the problem – they see it as the solution to a life that is just not fulfilling. Even when family members give up on them, they are unable to see the truth. Heroin gives them an escape, and most cannot see that it is actually making their situation worse.

It is Possible to Beat a Heroin Addiction

Despite how heroin addicts feel about the drug, it is possible to overcome addiction. Moreover, there will be times when these individuals have moments of clarity and decide they really do want to stop living the life they are living and get better.

Although for many years treatment for heroin addiction centred around the methadone programme, many experts believe that this approach is counter-productive. In fact, there have been cases where heroin addicts have been given the heroin replacement drug with the intention that doses would be reduced until no longer required but have simply been left on the replacement drug for years. Some have been taking methadone for a decade and have no hope of ever being free of it.

If a replacement drug such as methadone is to be administered, it should be used temporarily to help reduce the withdrawal symptoms associated with heroin detox, but it should not be a long-term solution. What often occurs is that the heroin addict simply swaps one addiction for another.

Experts in the field of addiction recovery believe that detox and rehabilitation is a much better way to overcome a heroin addiction for good. But what does this involve?

Detoxing from heroin can be complicated and should take place in a supervised facility with staff who have experience of the process. Heroin can have a profound effect on the way the brain works, and has a severe impact on logic and reasoning. This can make heroin addicts incapable of making good decisions, even if their own survival is in jeopardy.

During detox, it is common for strong cravings for the drug to occur, which can lead to patients exhibiting strong drug-seeking behaviours. They may become manipulative and demanding in their attempts to get their hands on heroin.

Withdrawal symptoms range in severity and are typically graded from 0-3 with 0 being the mildest and 3 being the most severe. Symptoms tend to start off mild before increasing in severity. Most are gone within a week, but some will continue for longer, such as aches and pains, anxiety, and sleeplessness. Unfortunately, cravings can occur periodically for many months.

Although heroin detox is not a pleasant process, it can be made easier and safer in a dedicated facility with the administration of specific medications and supplements.

Once detox is finished, the process of learning to live without heroin begins. This takes place during a rehabilitation programme at either an inpatient or outpatient basis. Due to the strong cravings for heroin that tend to occur for months after a detox, it is recommended that recovery take place in a residential facility.

With inpatient programmes, patients are placed in a secure environment where there are no distractions and no access to any temptations or triggers. Being in such an environment restricts the ability to access drugs and gives the patient little option but to focus on his or her recovery.

Inpatient programmes are supportive and therapeutic and are successful in the treatment of all types of addiction, including heroin addiction.

It is hard to comprehend what heroin addiction is like without having experienced it yourself. Nevertheless, here at Primrose Lodge we have many staff members with years of experience helping patients to overcome such illnesses. Their experiences have given them an in-depth knowledge of how this addiction affects the individual and what treatments work best. Some of our staff members have their own experience with addiction so know what the process involves and are therefore perfectly placed to provide relevant advice and information.

If you need help for yourself or a loved one, get in touch with us today. We can provide the information you need to take the next steps towards a substance-free life. Please call to see how we can help you overcome a heroin addiction for good.